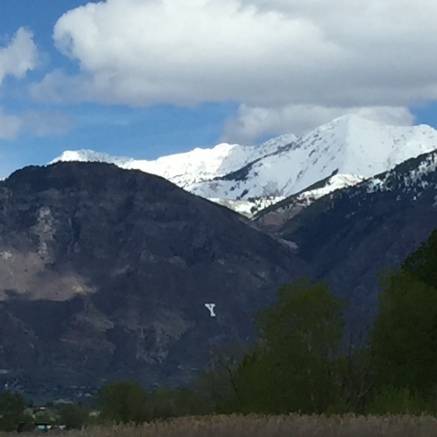 What a powerful thing it is to return to your alma mater.  If it’s one of the great schools, going back brings strong emotions.  I remember when one of the consultants I worked with, Stephanie Wall, recommended I attend a professional conference put on by her alma mater, University of Michigan.  The honor with which she held her school and their executive training was palpable.  Why do we feel so strongly about our alma mater?  One of my careers (in the 1990’s) took me to countless universities throughout the nation.  Each had it’s own unique feel, but all were wonderful.

Well, this week Wendy and I walked the campus of one of the great institutions of the world, Brigham Young University — our alma mater.  BYU is an elite school which draws students from all over the world.  55 languages are taught on a regular basis (30 more as needed based on interest). Top rated in so many disciplines.  Difficult to get in for two reasons.  First, you need to show not only academic excellence, but you must also have a commitment to the honor code, which is unique to the world.  The students take this honor code very, very seriously.  It is a protection and allows them to learn with like minded people.  They realize it is a privilege to attend this university, and there are many waiting in the wings who would fill their spot if they are not willing to live by these high standards.  The students of BYU are in a hurry to learn, to become adults, to make an impact on the world, and to meet and marry someone with similar maturity and goals. 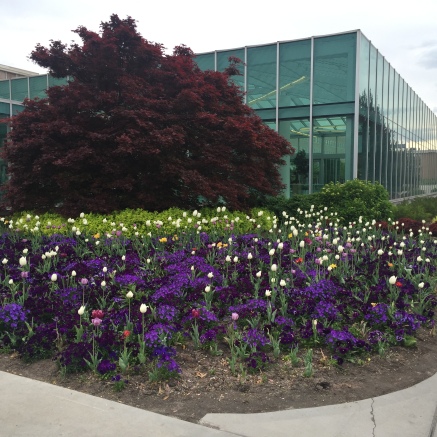 The grounds at BYU are spectacular

And the campus is beautiful.  Pristinely clean. Flowers are everywhere. The smell is amazing!

Nestled in the Utah Valley south of Salt Lake City, BYU is in the shadow of tall, snow covered mountains — a 360 degree panorama of quiet giants.  In 1977, when I arrived as a freshman after a long drive from Indiana, it was long after dark.  I climbed wearily up in the top bunk and immediately fell into an exhausted sleep.  When I awoke the next morning, my view was facing east toward the mountains, which filled the entire window.  I reeled back, overwhelmed as if they might topple over on me.  I was reminded of that feeling last week as I drove our motorhome into Provo.  It takes a couple of days to adjust to those majestic, towering mountains. 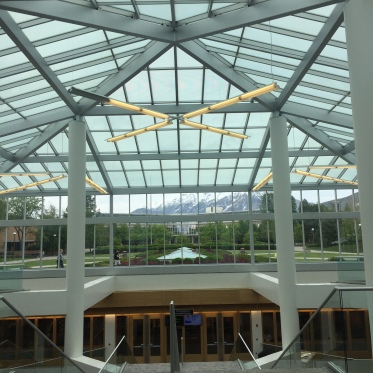 View of Mt. Timp through the BYU library

My years at BYU were some of the happiest days of my life.  In my freshman year some older guys took me under their wing, told me of the great adventures they had had serving as missionaries in places like Honduras, Japan, Chile, etc.  Two years later, after I had served a mission to Southern California, I dated Wendy and we were married.  We lived in a humble basement apartment while we worked, scrimped, saved and went to school.  We had our first child, Jesse, and felt so blessed to have such a happy boy in our lives.  So many great memories. 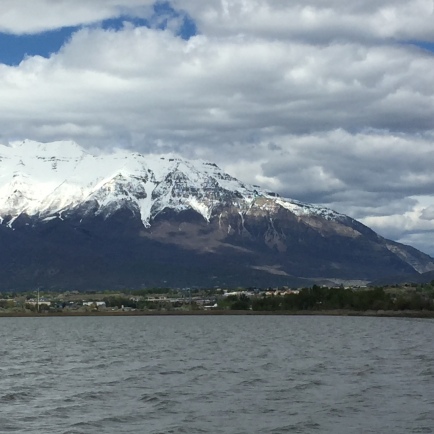 Wendy and I were able to attend BYU and work there with very little student debt.  And BYU has kept their tuition remarkably low.

But I see a debate approaching in our nation as other schools continue to increase their tuition.  It has been decade after decade of significant tuition increases at institutions throughout our nation.  All the while their administrations have become bloated and their tenured faculty are required to teach fewer and fewer hours each year.  At some point the education model will break and a revolution will wipe out the old ways.  Online education seems to be our future.  And yet, I mourn for future students who may not get the chance to feel the energy of an MIT campus or the tradition and history of a Princeton.

Tomorrow morning, after a two-week stay in Provo, Utah, Wendy and I will release the parking brake and roll on out of the shadow of these beautiful mountains, making us a little sad to say goodbye once again to our beloved BYU.  It is such a beautiful place filled with people seeking excellence.  What an honor to have attended so many years ago.

One thought on “Alma Mater”