The Longer You Stay, the More Things Happen

You’re still in OKC? You must really like the place!!

Not so fast, buckaroo. It’s all about the waiting. Patiently waiting for good news. We’ve been here a week getting repairs on the Detroit Diesel motorhome engine.

In the meantime, a call came in from the body shop in Blairsville that has taken on the assignment to sell our Infiniti G37 coupe. Hey we could use some good news: maybe they have a buyer!!

Nope. This is all about a series of unfortunate events. Never in the history of their business as this EVER happened. They are SO sorry.  Uh oh.  Sorry about what?

Apparently an employee at the car rental agency that shares their building pulled up in a rental SUV, jumped out and went into his office. A few minutes later the SUV, which was not in park and did not have it’s parking brake on, rolled down the lot and crashed in our car. Creamed it.

We had a pristine car for sale. Now we have a severely damaged car that will need extensive repairs and will never be worth the asking price. Arrggghhhh. We’ll have a discussion with the car rental agency about this, I assure you.

Then we got a call from the truck engine shop- “You’re good to go. RV is all done”, they say.  So we packed our stuff up from the motel and showed up at 3pm while the technician was finishing his paperwork.  We asked him how the test drive went, and he said “Ahh, we were just getting to that.”  30-minutes later the technician tells us the test drive did not go so well.  An engine warning code is coming on, so we’ll have to keep it another night.

Back to the motel, get another room (yay, change of scenery) and unpack.

I could use another watery zen sandwich on my floaty thingy in the motel pool, but the weather is too cloudy and breezy. Will settle for a classic TCM movie and see what tomorrow brings.

So while we have been waiting this past week, what have we done? I’m glad you asked, because it has been surprisingly interesting.

Things to See and Do in OKC

So, I’m not a cowgirl, but this is a fascinating, huge place. Every gallery leads into another 2 galleries, with lots of twists and turns. From Native American art to saddles, old cowboy movies, rodeo, hundreds of barb wire samples (I didn’t know there were so many designs!), John Wayne’s memorabilia collection, art by Russell and Remington and a jaw-dropping collection of five groups of 16 foot high oil painted triptychs of scenes from the West.  It is well worth a visit.

End of the Trail Monument

Out Where the West Begins, by Arthur Chapman, speaks to my need to roam this vast country:

That’s where the West begins;

That’s where the West begins;

Out where the world is in the making,
Where fewer hearts in despair are aching, 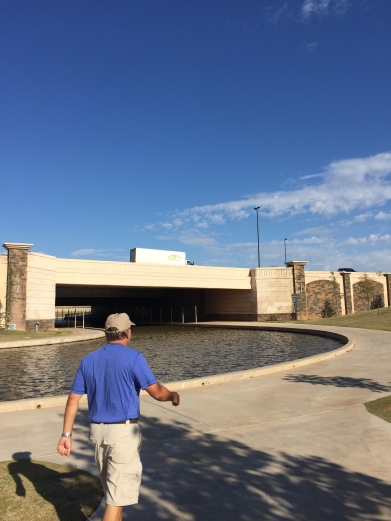 in 1889, unassigned lands were opened to up in a race on April 22. At high noon, 50,000 people raced off to grab either a town lot or up to 160 rural acres. Those who cheated and hid out in the brush ahead of time to claim the best pieces of land were called Sooners.  (And now you know!)

The river walk leads under the highway and into lovely manicured areas by the Land Rush Monument and the downtown hotel district and a Bass Pro Shop. I don’t think I’ve ever been in one of these stores before. (Hey, we’ve lived in Blairsville for 14 years.  We were thrilled to get a Walmart.)  This store is an event unto itself. The clerk said this was one of the smaller Bass Pro Shop stores, because it didn’t have a restaurant.  But it did have a herd of taxidermied bison running across the top of the clothing displays; an entire coyote family; a grizzly bear scaring off rock rappelling mannikins; a river camp with an old cabin and a rusted pickup truck over an aquarium fishing hole filled with huge live game fish; and acres of things to buy, including  an indoor fleet of enormous pontoon boats. 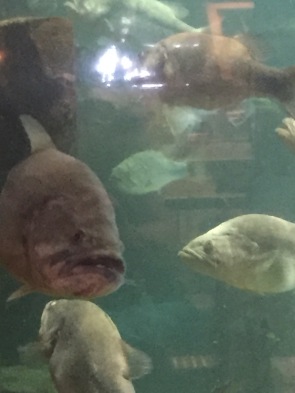 I resisted the urge to be a conspicuous consumer and only walked away with my replacement Leatherman mini-multi tool (which the TSA so kindly confiscated on my last flight) and a set of sporks for our Bento lunch boxes.  I really liked the ice cream making soccer ball and the camoflaged foodsaver vacuum systems for hunters.

Can see myself in a small inflatable rubber row boat: on a lake, fishing for our supper, napping when I feel like it- away from it all, rocking to the rhythm of the water. There might be room in the RV basement for an inflatable boat.

An older man, skinny as a rail, tan as a nut, maybe 110 pounds after a full Thanksgiving dinner, sat next to me in the stands. He had on a cream straw cowboy hat, a pristine ironed cowboy shirt, blue jeans with a sparkling sheen of heavy starch, with a crease so sharp it could cut you and Sunday go to meetin’ cowboy boots. He was the real deal. 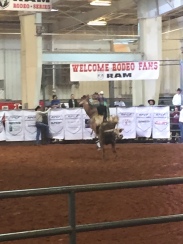 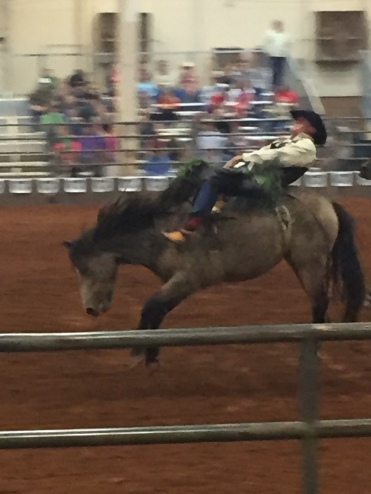 When is a heritage center sweet? When the darling little guide tells you with great sober sincerity about your Experience Theater ahead of time- to make sure you are prepared for the 4-D event. You are immersed in a cattle drive up from southern Texas due north 1000 miles in 100 days to Kansas City, herding longhorn cattle in all kinds of weather and danger. You smell the sage, feel the thunder of cattle hooves, sense the wind and even get wet in a thunderstorm. Fun for all ages.

These are everywhere and they are HUGE. I mean, can you really sell 500 pairs of $500 cowboy boots or thousands of pairs of jeans and plaid shirts??  I don’t know, but they sure try.

We went walking at the Will Rogers Park the other day and saw groups of people- all ages from little kids to teenagers, young adults and older folks like us playing the different holes of a large disc golf course. It was heartening to see and no one was on their cell phones: no texting, tweeting, twerting or tweeking. We have the equpment, just need to get started!

At the rate we are going, we may become experts at the game before we leave OKC. Got plenty of time.

4 thoughts on “Things to Do Around Oklahoma City”